The Back to the Classics Challenge is a fun incentive/excuse to mix some classics into your reading for the year (and there’s a chance to win $30 in books, so win-win!). It’s not too late to sign up if you’re interested…just click the graphic to the left. Anyway, I’ve finished two more books for the challenge, so time for a pair of reviews!

A few years ago I read Alice’s Adventures in Wonderland and was unimpressed. I found it obnoxious and shrill as the whole thing consists of Alice being rushed about and berated for being confused by the nonsensical world of Wonderland. The random nonsense level in Through the Looking Glass was about the same, but I enjoyed it a lot more. Alice’s imagining to herself was charming, the wordplay was a lot of fun, and who doesn’t love the poem Jaberwocky (to say nothing of the classic illustrations)? This classic weirdness is well worth reading.

In this satirical novel, Trollope skewers late 19th century British high society. The sprawling story was originally published as a serial, and I think that Trollope couldn’t quite decide (or changed his mind partway through) about which character or plot thread was primary.

No matter which character of plot thread you follow, the overarching concern seems to be the manipulation of other people…usually for money, matrimony, or both. Trollope casts a cynical eye on mercenary marriages, feckless young men, and financial scandals.

None of the characters are pure as the driven snow (except for a couple of the young women who act like complete ninnies for most of the book). Few of the characters are sympathetic, but some of them are interesting. One character particularly caught my attention due to some similarities to a certain orange individual who shall remain nameless: a businessman much fawned upon because of his reputed wealth (despite rumors of past failed businesses and shady dealings) who enters politics as a conservative though having few real personal convictions.

Like a lot of satirical novels, the overall effect of the story arouses disgust more than amusement. Trollope doesn’t often demonstrate the witty turn of phrase that some satirists use to at least elicit a snort of derisive laughter. This makes parts of the book a bit of a slog, but overall it’s readable and insightful as long as you don’t mind a cast almost entirely void of sympathetic characters. 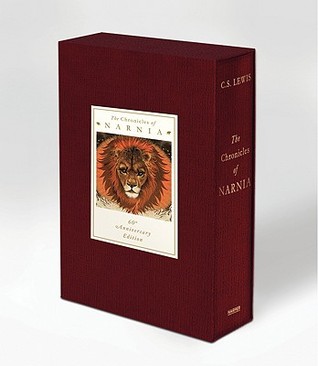 Title: The Chronicles of Narnia

Though the seven books of The Chronicles of Narnia are written as fairytales for children, they follows C. S. Lewis’s philosophy that, “A children’s story that can only be enjoyed by children is not a good children’s story in the slightest,” and “No book is really worth reading at the age of ten which is not equally – and often far more – worth reading at the age of fifty and beyond.” While I have not yet reached the “fifty and beyond” category, I enjoy these books a little more each time I read them (and I have read them every two or three years since I was in first grade).

The Chronicles of Narnia tell the tale of a magical world of talking animals in which British children have a variety of adventures (defeating a witch, winning the throne for the rightful king, rescuing a lost prince, etc.). Though children from our world are the main characters, the true hero of the series is Aslan, The Great Lion and Son of the Emperor-Over-the-Sea. Aslan is clearly a Christ character, intended by Lewis to be “a supposition” of what it would look like for the Son of God to appear in a different world. Lewis recognized that “The value of myth is that it takes all the things you know and restores to them the rich significance which has been hidden by the veil of familiarity.” Each book, besides being a fun fantasy story, explores a different aspect of Aslan’s character.

…and so much more. These books have grown with me through increased understanding in a way described by Aslan in Prince Caspian:

“Aslan,” said Lucy “you’re bigger.”
“That is because you are older, little one,” answered he.
“Not because you are?”
“I am not. But every year you grow, you will find me bigger.”

The only book in the series about which I have some reservations is The Last Battle. It contains breathtaking descriptions of paradise but also emphasizes some confused pluralistic ideas that depart from biblical orthodoxy. It is still worth reading, but those who take seriously Jesus’ claims to be the only way to heaven (e.g. John 3:16-18) should approached it with discernment.

The order in which I have listed the books above is C. S. Lewis’s original publication order, and I personally think they are far better when read in that sequence rather than the “chronological” order currently used by publishers. If nothing else, Lewis clearly intended The Lion, the Witch, and the Wardrobe to be the readers’ first impression of Aslan. And I will leave you with part of Aslan’s beautiful introduction from that book. Come meet Aslan:

“…Aslan is a lion–the Lion, the great Lion.”
“Ooh!” said Susan, “I’d thought he was a man. Is he–quite safe? I shall feel rather nervous about meeting a lion.”
“That you will, dearie, and no mistake,” said Mrs. Beaver, “if there’s anyone who can appear before Aslan without their knees knocking, they’re either braver than most or else just silly.”
“Then he isn’t safe?” said Lucy.
“Safe?” said Mr. Beaver. “Don’t you hear what Mrs. Beaver tells you? Who said anything about safe? ‘Course he isn’t safe. But he’s good. He’s the King I tell you.”
“I’m longing to see him,” said Peter, “even if I do feel frightened when it comes to the point.”

(Note: I was just taken on as a volunteer writer for a local online magazine and this is a copy of the second article I will be submitting to them)